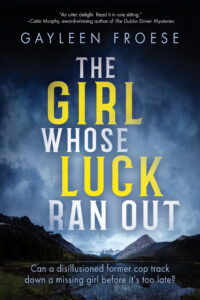 The Girl Whose Luck Ran Out is a new detective novel and the first in the Ben Ames Casefiles series, from DSP Publications. It's available at most major booksellers. Read the first chapter and find out more.

Can a disillusioned former cop track down a missing girl before it’s too late?

Seven years ago, criminologist Ben Ames thought he’d change a big city police force from the inside. He failed. Now he’s a private detective trailing insurance frauds and cheating spouses through the foothills of the Rocky Mountains. Like police work, the job would be easier if he didn’t have a conscience.When university student Kimberly Moy goes missing, her sister begs Ben to take the case.

But before Ben can follow up on any leads—What does the Fibonacci series have to do with Kim’s disappearance? What do her disaffected friends know? And where is her car?—chance and bad timing drop his unexpected ex, Jesse, into the mix.

Ben doesn’t have time to train Jesse into the junior PI he seems determined to become. Amateur sleuths are always trouble. Unfortunately, this is turning out to be the kind of case that requires backup, and his intuition is telling him Kim’s story may not have a happy ending...